PopImpressKA Journal: From our media Partners /Das ZeitBlatt Magazin / BARONESS MALKA BAS REUVEN – THE KIND ADVOCATE FOR THE ONES IN NEED The picture of a Baroness in one’s mind isn’t behind a desk or in front of a judge, but for Baroness Malka bas Reuven it’s a typical day, working on legal cases.

She’s solicitor for her city’s civil rights agency, a member of the York County Advisory Council to Pennsylvania’s Human Relations Commission, and an ambassador for UGRC Green’s immigration rights work, putting her in the middle of some of today’s hottest legal issues.

Broadway. When she gets out of the office, however, she’s often back to work again after dinner, as a theatre and opera critic and entertainment journalist for such internet and print publications as Broadway World and PopImpressKA Journal, working closely with publisher Baroness Olga Papkovitch. “One year when I had to cover the Philadelphia International Festival of the Arts, I had twenty-five shows to attend and review in one month, while I was working daytime.”
She also interviews television, theatre, and opera luminaries.  “I’ve been lucky enough to interview Carol Kane, Terrence Mann, who was Broadway’s original Javert in Les Miserables, and my favorite soprano, Frederica von Stade.  I never know who I’ll meet next!”

She has also written for Crown and Country, the fabulous biannual publication of Chairman Thomas Mace Archer-Mills’ British Monarchy Society and Foundation. Thomas just made headlines as the MOST interviewed man of the Royal Sussex Wedding weekend in England.

International. It’s surprising that she has spare time to devote to charity endeavors, but she’s an ambassador for the Internationale Pestalozzi Society of Switzerland, an international educational association whose royal patron is Princess Anna Bagration-Gruzinsky of Georgia. Baroness Malka works closely with Togbe Osei III, local ruler of Godenu, Ghana, to provide materials for local schools.

“The Togbe told me that books at the schools were often destroyed because the children were so anxious for reading materials. I realized that electronic books were always available, so I developed a digital school library and loaded it on tablets for students and on jump drives for installation on other computers. Now I want to build Godenu an audio library as well.”

Saint George. A member of the Royal Society of Saint George, the Baroness also works closely with Ratu Muda Princess Karen Cantrell to achieve the Society’s charitable goals. She’s been honored with a Presidential Lifetime Volunteer Service Award, the title of Kentucky Colonel from the Governor of Kentucky, and by being made a Dame Grand Cross of the Order of the Lion of Rwanda, among many.

None of these matter to her as much as children’s education, though. She’s too busy working on a book donation to a local church youth center at the moment to be bothered with them. That – and groaning at her coming week’s theatre schedule. 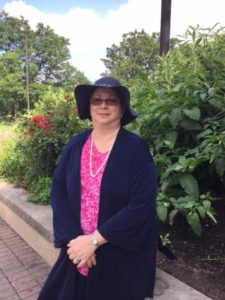 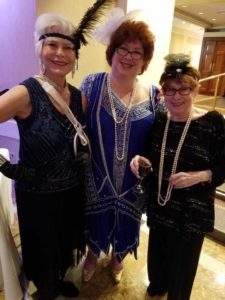